Satellite Hangar - OR Tambo International Airport, Johannesburg (FAOR)
Fields Airmotive has access to, under rental agreement, for  use of hangar for aircraft requiring a hangar larger than that at Rand Airport. 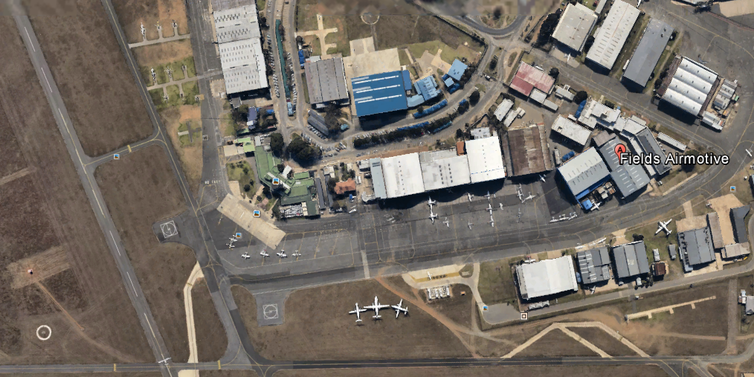 A history of serving aviation since the 1930s

​Although we have been in the aviation business a long time, experiencing various name, ownership and political changes, we have not become complacent and have always put the customer forefront in our business so we may continue with our proud heritage into the future. Fields Airmotive’s heritage extends back for over 80 years. It started business as an aircraft operating company at Baragwaneth airport, south of Johannesburg in the early 1930’s. The parent of Fields in Africa was the Aircraft Operating Company (AOC) of London, which carried out aerial survey work in Africa with fleet consisting of a Puss Moth and a Dragon Rapide. The maintenance of the two ​aircraft was not enough to justify a special servicing team, so
Hunting itself started when Charles Samuel Hunting entered the oil business in the 1890's expanding a ship owning firm set up by his father. He pursued exploration prospects in Russia, built the first batch oil refinery on the Thames, UK and ordered one of the first ever oil tankers and became the largest independent tanker fleets in the world. After the Second World War Hunting expanded into all sorts of ventures, not always successfully, including aircraft servicing, manufacturing, airline business and a defence company whose precision engineering skills gave rise to the formation of an oil services company. Hunting name in aviation became synonymous with a range of military and civil aircraft including the Jet Provost. During this time, when hostilities of World War Two ceased, Fields was soon to be reformed at Rand Airport and in  1952 the name of Field Aircraft Services (Africa) Pty Limited was adapted and the company moved into the Rand Airport premises vacated by South African Airways when they moved to Palmietfontein Airport and later to Jan Smuts Airport. In July 1978 Field Aviation entered into a technical assistance agreement with Rolls Royce for the RR Dart engine., starting a long and fruitful partnership on this engine type.
Hunting PLC group in the 1990s started to divest its many non-core activities and today Hunting PLC is an international energy services provider that manufactures and distributes products that enable the extraction of oil and gas. In the late 1990s, portions of Hunting Aviation (Pty) Limited where taken over by private investors and renamed to its present Fields Airmotive cc name and continues to operate at Rand airport in the engine and airframe overhaul and maintenance business, drawing on its history and experience gained over 80 years of operating on the African continent and serving customers globally.
South Africa & Johannesburg

Situated at the southern tip of Africa, South Africa is 1 233 404km² in size and is edged on three sides by nearly 3 000km of coastline, with the Indian Ocean to the east and the Atlantic Ocean to the west. The country is bordered in the north by Namibia, Botswana, Zimbabwe and Mozambique, and also encloses two independent countries, the kingdoms of Lesotho and Swaziland
​
Johannesburg  is the second largest city in Africa, with more than 3 million people. Johannesburg is geographically fairly centrally located in South Africa, and as the biggest urban conurbation and it’s also the largest transport hub – for local, cross-border and international travel. More international carriers fly here than any other city in southern Africa, and there are direct flights to most African cities, USA,  major European cities, the Gulf,  Australian and Asia
Click buttons for